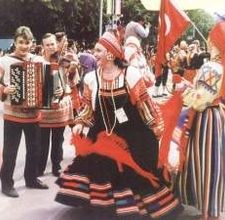 In a recent competition on the television show “So You Think You Can Dance,” the finalists donned Russian folk attire and displayed their talent in a traditional Russian folk dance. The choreography, which was difficult, showed how much the Russian music and dance is enjoyed and recognized today by international audiences. For example, the “kozachok” or “kazachok” is a much appreciated and known folk dance from Ukraine, with its increasing tempo and high kicks made from a squatting position. Yet this is only one of the many different forms of Russian folk dance that have become familiar over the nation’s history.

Early History
The first Russian folk music and dance extends back into the 10th century, when Slavic tribes moved into Russia. The Slavs were known for their knowledge and mastery of instruments, songs and dance. Because of the many invasions of the country and the resulting inter-cultural mix, many of the original dances have either been combined with each other into new forms or been lost over time.

The first dances were only known by the peasants and lowest classes. The upper classes and aristocracy did not dance themselves, but they instead enjoyed watching the performances of dance troupes and clowns. There were also street entertainers, or “skomorkhi,” who sang and danced and performed tricks as they wondered from town to town.

First Bear Dance
According to Russian dance director Mikhail Victorovich Smirnov, the first established record of Russian dance occurred in 907AD when Vechshiy Oleg, first grand prince of Kiev, was celebrating his victory at Constantinople. Although his troops could not infiltrate the city walls, they did force the Greeks to enter into a treaty. At the celebration, male dancers dressed up like bears, and several dancing bears were clothed like Russians. At the end of the feast, Oleg demanded the bears be released back into the wild and the dancers be executed. Apparently, Oleg, who was partially blind, thought the dancers were from the northern tribes who owed him numerous tiger skins.

Holiday Traditions
Some of the Russian folk songs and dances were associated with calendar events, such as planting and harvesting and others with family rites, such as birth, weddings and funerals. Most Russian holidays have been celebrated in the fall and winter when the farming is done for the year. The entertainment begins with a prayer and is followed with an abundant feast, singing, dancing and a series of entertaining fist fights or “stenka na stenku,” “wall against wall.”

Folk Dance Clothing
The clothing, which accompanied many of the dances, was also based on the event. Holiday headwear included a “kokoshnik,” or headdress that was decorated with pearls and gold thread; embroidered and decorated blouse or shirt; “sarafan,” or jumper; belt and ornamented apron. The primary color was red, which meant “beautiful.” The men wore “kosovortkas,” or shirts fastened on the side; belt; narrow trousers; semi-high or high boots.

First Dance Troup
In 1937, after the civil war came to an end, the Soviets organized the first Russian folk dance troupe under the direction of Igor Moiseyev. The troupe continues to be one of the top performers of folk dance worldwide. The dancing ensemble with its traditional music, dance and song, which is popular in the West, keeps the audience clapping and shouting praise. Moiseyev died in 2008 at the age of 101.

Moiseyev Dance Company
The Moiseyev Company embodies all of the Russian traditional folk dance arts and preserves the folk culture. The classically trained are more than dancers. The men and women in their traditional belted tunics and bright red dresses are also acrobatics, like today’s break dancers, with bodies spinning and zigzagging on the ground so fast they are almost impossible to see. The dancers fly into the air with their legs wide apart and their fingers touching their toes. While they are dancing, they are telling the story of the hundreds of years of Russian history and the many changes that occurred during the centuries. 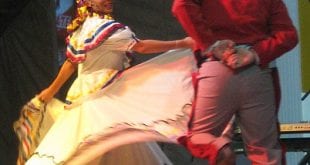 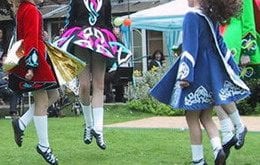 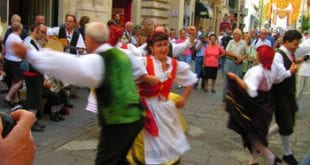